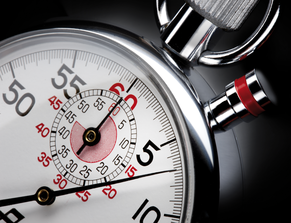 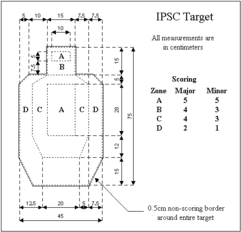 I’d like to break this down and hopefully make it as simple as possible.We’ll start with some basic examples and then move on from there.Let’s not get too bogged down in the fine details. Instead, let's gain abetter awareness and understanding of scoring, and how we can use the

math to improve our scores.

I recommend you immediately start applying this formula and these
concepts on the training range. Take the time to calculate and
compare hit factors on your drills and stages at practice. This will
quickly give you an understanding of how variations in points on the
targets and time on the clock, can influence your score.

This may seem like a very basic subject matter, that comes extremely easy

for some shooters. I've found through teaching though, that very few competitors

have a grasp of how exactly the scores are derived. If it seems like a foreign language

Before we get started, one of the most common questions I get asked
is, “Do you figure out the hit factor before you shoot the stage, and
does it influence the way you shoot?”. I’m actually going to hold off
until the end to answer that question…

USPSA and IPSC use the “hit factor” method of scoring. Although not
immediately intuitive, it truly is an awesome method to score the
balance between accuracy, power, and speed. After all, these are the
founding principles of our sport. Putting it simply, the shooter with
the highest hit factor, wins.

Points per second, huh?  Another way to say this is, the amount of
points on the targets you accumulated for a given second during your
run. A hit factor of "5" for example, means you earned 5 points for
every second on the clock. Or, armed with the knowledge that an A-zone
hit is worth 5 points, you were able to score a single A-zone hit, per
second.

Taking an entire second to score a single A-zone doesn’t sound too
impressive, does it? But remember, that’s taking into account your
draw, movement, aiming, transitioning, reloading - all activity that
took place during your run, is used in the hit factor formula. You
can think of the HF as a measurement of efficiency.

To determine your hit factor, simply divide your total target points
by your time. Let’s use some easy examples to put this formula to
work.

“Stage 1” is a single target at 7 yards, requiring 2 hits. You happen
to shoot this stage in a blistering 1.0 seconds, with 2 A-zone hits
(referencing the chart, 5 points per "A", gives us a total of 10
target points).

Using the hit factor formula, of points divided by time:

With a 10 hit factor, you accumulated 10 points per second.  Nicely
done! Moving on to “Stage 2”, you have a single target at 40 yards,
requiring 2 hits. Let’s say you run this stage in 2.5 seconds and with
2 A-zone hits. Your score:

On Stage 2 you earned 4 points per second. From these two examples, we
can see that the closer/faster target gave us a higher HF, whereas the
longer/harder shots gave us a lower HF. Your accuracy was identical,
but your hit factor was drastically different. Why? Because, as it
should, it took you longer to settle the sights, and shoot the
40 yard target.

A generalization could be made that the lower the HF, the more
important your accuracy, and the higher the HF, the more important
your speed.  There is a caveat to this: shooters of similar ability
will tend to have similar times. In this scenario, the deciding factor
will be points on target, or accuracy. Keep this in mind while
shooting your next match.

Let’s take a closer look at this idea of a certain HF “favoring”
points versus time, or vice versa. Let’s say we’re shooting a stage
that has an estimated HF of 2 (for this example, we’ll be shooting
minor power factor). We happen to shoot a D-zone hit and wonder

if we should spend the time to make it up. Well, let’s let the HF

formula help us decide. Hang with me here!

Because we’re shooting minor, that D hit costs us 4 points. We decide
that it will take us 0.50 of a second to make up this D with an A. So,
with the best possible score in mind, do we send another shot, or do
we leave the D? Here’s how we’ll determine the answer:

(The following "make up shot" example isn't perfect, because

as soon as you shoot a D-zone hit, you'd no longer be on the estimated HF - which will skew

the numbers. It's important to remember that these are estimates, because

you may be above or below the "estimated HF" when you shoot that D hit. This is where we

can make this really complicated. To keep it simple,  get a feel for the numbers and how accuracy

and speed influences the HF - on both the high and low ends of the spectrum. But

above all else...shoot A's as efficient as possible.)

Multiply the estimated HF of 2, by the make-up split of .50 seconds:

It will cost us 1 point to make up the D-zone hit. Knowing
that the D is -4, we gain back 3 points by making that shot up. In
fact, as long as the pick up shot is completed in under 2 seconds, we
will gain points. Why? Because 2 seconds multiplied by the HF of 2,
equals 4... the same number of points we forfeit for shooting the D-zone hit.

A 2 second make up shot in the A-zone, would then be equal to

leaving the D. Any pickup shot over 2 seconds, and we’ll start to lose
points.

Let’s apply this scenario to a stage with an estimated 15 HF. Again,
we shoot a D-zone hit and it costs us 4 points. A pickup shot will
again cost us half a second. Do we stand to gain by making it up with
an A-zone hit?

We will spend 7.5 points in order to turn this D into an A. With the D
being -4 points, that means we stand to lose 3.5 points by making this
shot up. Working these numbers, you can start to see how it may be
stated that high hit factors favor speed, whereas low factors favor
points. It also illustrates, how in essence, TIME equals points.

Before I put you to sleep, let’s look at one more scenario where
knowing the HF and how to apply it to your stage strategy is crucial.
This time we’re shooting a stage that features a disappearing target.

Disappearing targets are scored differently, in that miss penalties
are not assessed.  The most we stand to gain on these targets is 10
points. That assumes that we actually shoot and score 2 A's.

So, there we are – in the middle of our walk through, and there’s a
position that has an activating popper, and a disappearing target. Is
it possible to not engage the disappearing target and have a
higher HF, or should we wait to engage it? Here’s how we’ll find the answer.

First, this stage has an estimated 8 HF. You either figured this out
on your own, or maybe you looked at the results for similarly skilled
competitors.  Next, you need to measure the time it takes for the
target to activate, appear, and for you to engage it. You determine

that it takes 2.25 seconds total. Also, in this example, there are no
other targets you could be engaging in that window of time.

The formula has spoken! If we decide to wait and engage the disappearing

target, we will spend 18 points in an effort to earn a possible 10 points.

By not engaging this target, we stand to gain 8 points. Even more if

those 2 shots on the disappearing target, aren't in the A-zone. That's a pretty

hefty chunk of change to be sure.

Here are some typical scenarios or stage characteristics that may
produce lower hit factors:

So, back to the original question…do I figure out the hit factor before I
shoot the stage, and does it influence the way I shoot? For the most
part, I do not. I will say though, through experience I can
intuitively get a feel for the HF, just by walking the stage. You will too.

When the hit factor starts to lean towards an extreme (either high or low) I will
focus on and emphasis the appropriate principal - in both my strategy,
and my execution. But, most of the time, shooting A’s as fast and
efficient as possible, will serve you well.